Ostensibly a biography researched and written by Jung Chang, it illuminates more than the life of “the Concubine Who Launched Modern China” but also the ways in which perceptions of her beyond China were influenced by orientalism. Edward Said (1978) conceived of the practice of orientalism as a way in which the Asian region was defined and located as Europe’s “other”. It both homogenised yet exoticised Asians including the China nation-state. It also implied European forms of knowledge represented intellectual and cultural mastery to which the othered peoples could only hope to aspire. 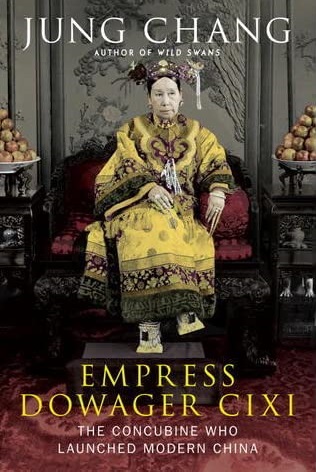 Jung Chang cleverly provides a portrait of a woman who was the de facto supreme ruler of China in the late Qing Dynasty for almost half a century. From concubine, to Empress Dowager and Regent, Cixi challenged what were accepted norms and concepts of traditional rules. She shared rule with Empress Dowager Ci’an for a period representing a strong partnership and collaborative approach that is not often acknowledged as possible and historically evident in Western ideas of womanhood. Much of the text includes recognition of the ways in which Cixi was portrayed, perceived, and therefore judged through Eurocentric Western eyes yet it provides a plethora of evidence as to how this neglected the complexities of the situations and political intrigues of China during her time.

Cixi is often credited as the person who determinedly dragged China into the modern age but this commonheld perception (in the West) fail to understand the ways in which China was repeatedly ravaged and  undermined by British Imperialist and other invading forces. Jung Chang creates a thoughtfully deep look at what this iconic leader faced and achieved. It might be deemed a homage given it pushes back on Western tellings of her rule and responses to political plots. However, I felt that it openly acknowledged her shortcomings and failings alongside her triumphs and visionary aspirations for China. It also provides insights to the personal journey Cixi reflected in her own writings while also drawing on the perspectives of other key players situated in her court.

Cixi is often demonised and villified, as if she were a woman drunk on power and anxious to protect a delicate ego. Yet, Jung Chang deftly interweaves considerable evidence to suggest that such portrayals are more a function of how much historian practice often cannot face into the realities of powerful and empowered women and the ways in which their existence in the world demands their navigation of intersecting power dynamics. It’s a fascinating read that creates a deep and thoughtful impression of a complex woman who oversaw a period of significant change for a nation-state leaving a weighty legacy for “the Last Emperor” Pu Yi.